The Age of Exterminations (I): Who are the Typical Victims? 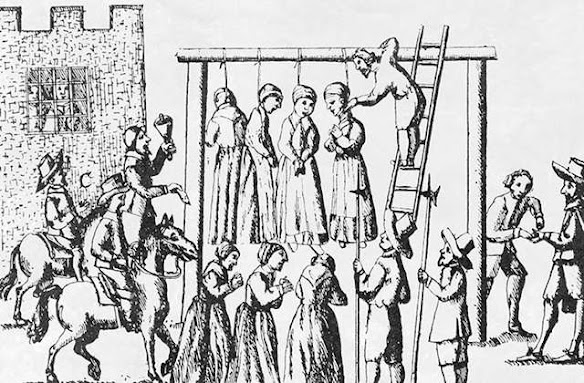 The extermination of the witches is a dark spot in the history of Europe, one that we tend to dismiss as the result of an outburst of superstition. But, as always, things are more complex than they seem to be at first sight. Witch hunting had a dark secret: the fact that killing witches was good business for many people because the assets of the victims could be confiscated. You can see this facet of the story in this illustration from the book, "England's grievance discovered..." by Ralph Gardiner, 1655. Note, on the right, the scene described in the text as, "Witchfinder takes his money for his work."

If you think of the story of the witch hunts of the 16th-17th century in Europe, you may be under the impression that the typical witch was an old hag living in a hut at the margins of the village, alone with a black cat.

But no, that wasn't the case. Maybe this kind of marginal people were occasionally killed for being witches, but they were not the usual victims. In reality, witch hunting had a strong monetary component and it was often carried out with a view on making a profit on the confiscation of the assets of the victims. They were not poor and destitute women but, rather, members of the growing mercantile class in Europe.

The profit-making facet of witch hunting has been often ignored by historians, but it is being reappraised and highlighted in recent times, for instance by Johannes Dillinger (2021) and by Shmakov and Petrov (2018). Both articles are highly suggested and provide a remarkable wealth of data about the financial mechanism that led to witch hunts: in short, there was no (or very little) witch hunting where the government didn't allow the assets of the victims to be confiscated. Killing witches, then, was just one of the many forms of legalized robbery in history,

It is a fascinating story that has to do with the birth of capitalism in Europe. During the 16th and 15th centuries, Europe was moving from a nearly pure agricultural economy to a commercial and industrial one that involved the formation of a mercantile class that would engage in activities such as money lending, manufacturing, and other services. It was among the members of this newly formed class that the "witches" were found. The landed aristocracy of Europe found it convenient to use the propaganda techniques of the time to rouse the rabble against this new middle class and incorporate their assets. It was a class struggle that died out when the middle class grew to such a level of wealth and power that it could refuse to be victimized. A couple of centuries later, with the French revolution,it was the turn of the landed aristocracy to be exterminated and their assets incorporated by the state.

Witch hunting, then, was just one of the many cases in which wealth transfer was not obtained by trade but by extermination. You can find many examples in history where a population in expansion invaded the land of another population, exterminated them (at least the males), and took the land (and often the females) for themselves.

There are more examples of this kind, including the extermination of the European Cathars (a Christian sect) in Europe (1209-1229 CE), that of the Armenians at the beginning of the 20th century, the Rwandans, the Cambodians, and several more. The latest case is the accusation against the Chinese government to be exterminating the Uyghurs, a population living in Xinjiang, a North-Western province of China. Without going into the details, we can say that all these exterminations have several points in common.

1. A relatively wealthy subgroup of society that can be identified by physical, linguistic, or cultural traits, sufficiently large to give a good revenue if defeated and spoiled of its assets.

2. A strained economic, social, or military situation that leads the dominant groups to look for new resources.

3. The lack of effective military defense capabilities on the part of the subgroup.

If these conditions hold, the temptation is strong for a government or for a powerful political group to exploit the situation by convincing people that the subgroup is composed of evil people: they eat children, cast evil spells on you, eat disgusting things, whatever. Then, physical elimination can take place and the assets of the victims can be confiscated.

It has happened so many times that it is unthinkable that it won't happen again. There is no doubt that we are in a difficult moment, both economically and militarily. So, the temptation is strong for the elites to identify one or more subgroups to exterminate and rob of their assets. Who could be the next victims?

I think I can identify some potential extermination candidates for the near future. But I would leave this question to be answered by commenters. Who would you think would be the most likely target for the next round of ethnic/political cleansing?